What is equine PPID (Cushing’s Disease)?

Pituitary pars intermedia dysfunction (PPID), formerly known as Cushing’s Disease in horses, is a hormonal disorder. PPID can occur in horses of any breed or sex and is believed to be a result of age-related neurodegeneration. PPID is more common in aged horses but has been observed in horses as young as five years of age. PPID is one of the most common endocrine (hormonal) disorders in horses. 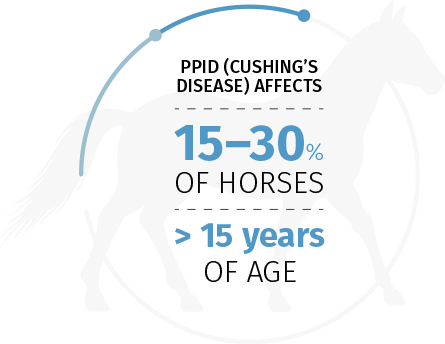 PPID (Cushing’s Disease) is a progressive neurodegenerative disorder that affects horses. In horses with PPID, the pituitary gland is unable to keep bodily functions in a healthy working state, resulting in a variety of clinical signs.

Although it is very common, PPID (Cushing’s Disease) is somewhat challenging to diagnose. Veterinarians used to rely on the manifestation of equine PPID symptoms to make a diagnosis, most notably abnormal hair coat, or lack of shedding. In recent years, diagnostic tests have become more accurate and can now help lead to a more concrete diagnosis, earlier in the progression of the disease. Early diagnosis and treatment may offer horses suffering from the disease a better quality of life.

A number of diagnostic tests exist for PPID, all of which are designed to evaluate hormonal function.

The resting ACTH test measures baseline levels of ACTH in the blood. If a horse’s baseline ACTH levels are above the benchmark, this is considered a positive diagnosis for PPID.

What is the outcome for horses with PPID? 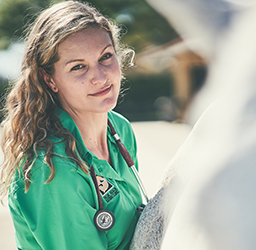 When veterinarians relied on the appearance of clinical signs and symptoms to diagnose PPID, it often meant that the disease was already advanced at the time of diagnosis. Therefore, even with treatment, horses’ life expectancy with PPID was shortened. As PPID is becoming better understood by the equine community, PPID symptoms are being recognized earlier, allowing for earlier treatment and an improved quality of life for horses with PPID.

Can you identify the signs of PPID? Learn about PPID and test your knowledge about this often-overlooked disease by taking the quiz. Start the quiz

While there is currently no cure for PPID, managing the disease can reduce signs and symptoms while improving the quality of life of horses with PPID.

Like many diseases, PPID (Cushing’s Disease) symptoms may differ depending on whether the PPID is in its early or advanced stages. Although the signs of advanced PPID are more obvious, early signs of PPID are important for a timely diagnosis, which ultimately translates into a better quality of life for horses with PPID.

Learn to recognize symptoms of PPID.

Can you ID the signs of PPID?

Pituitary Pars Intermedia Dysfunction (PPID) is the most common endocrine disorder in horses.* Take this quiz to learn more about PPID and how to recognize the symptoms.

Thank you for completing the PPID quiz.

PPID can often go undiagnosed. If you think your horse may be at risk, or showing early or advanced clinical signs, contact your vet.

Thank you for entering for a free PPID/ACTH test.

Eligibility will be determined by Boehringer Ingelheim Equine and is dependent on the symptoms and risk factors indicated.

We are reviewing your application and will let you know within 14 days if your horse qualifies.